Back to all posts

We Don't Even Know is talking to phenomenal people...

If you haven’t come to a We Don't Even Know variety show podcast live taping, you truly have missed out. We celebrate inspiring humans and conversation in an intimate space, the Red Room Speakeasy upstairs of the KGB Bar in the East Village. My co-host Christian Felix & I felt like our brand of conversation was virtually invisible outside of when we were on the phone together - the intersection of art, comedy, music, race, gender, existence, friendship, sexual orientation, politics and the minutiae. Our show has existed for 7 years and we still feel like outsiders in a good way.  Our next show is 9/24 at 8pm w guest co-host Duane Harriott (Negroclash, WRVU) Comedian Rob Cantrell,  Writer Tamara Best & Musician Chris Opperman.  See you Tuesday night! 9/24 Red Room,  8pm,  85 E 4th Street, NY, NY.

Jeremy O. Harris join us just as his hit play Slave Play makes its way to Broadway! Their in depth conversation (00:07:56 - 01:08:20) includes topics such as Harris’ Color Purple book report in the 6th grade, his mom, Club Monaco, his Rihanna interview, the relationship of fashion to theater, Aleshea Harris, black erasure, colonialism, white attention, being considered a “polarizing figure”, academic probation, The 1619 Project, art criticism and his appreciation of Mr. Show.  Jeremy O. Harris will be the youngest black man to ever be on Broadway and is having a big party on the first night of previews for Slave Play on September 10th.  His Broadway premiere is on October 6th.  Get your tickets now.

Comedian Nore Davis grew up in Yonkers, NY and quit college to do stand up. (at 1:08:40-1:36:08)  He grew up with a police officer dad and a controlling mom. Nore’s upcoming comedy tv special is called “Too Woke” and he explains the many burdens which come with being “too woke."  We discuss toxic masculinity, respect for the stand-up Gods, job security and being on late night tv on Conan twice. Christian asks about Nore’s use of the N word.  Nore has already released an Amazon comedy special called "You Guys are Dope” and his upcoming Comedy Central ½ Hour Special “Too Woke” comes out on November 8 at 11:30 PM. Check it out.  He has a regular show at Union Hall with his girlfriend comedian Nash Rose called Stellar Underground.

Get It Off Your Chest (at 1:36:33) is BAAACKKKK with audience member and former WDEK guest JJ Sasnowski joining Christian & Shonali onstage.  Their problems range from cologne, road rage and unwritten NYC rules.

WDEK’s last guest of the evening is musician Bianca Espinal (01:44:45) aka BIA.E (Be Infinite Anywhere Everywhere.)  Bianca is Dominican and grew up in Harlem. She started busking on the subway platform with her father at 17 years old.  She also auditioned American Idol and The Voice where Pharrell gave her the best advice. She received the semi-final position in Tengo Talento Mucho Talento, a Hispanic International televised show. Atlhough her sultry voice is unique to herself, you can hear Espinal’s many influences like Lianne La Havas, Amy Winehouse, and Dusty Springfield when she sings.  She sings two of her original songs Anytime (at 2:03:21) and Time (at 2:07:00).  Look for B.I.A.E on IG to find out about her upcoming shows. 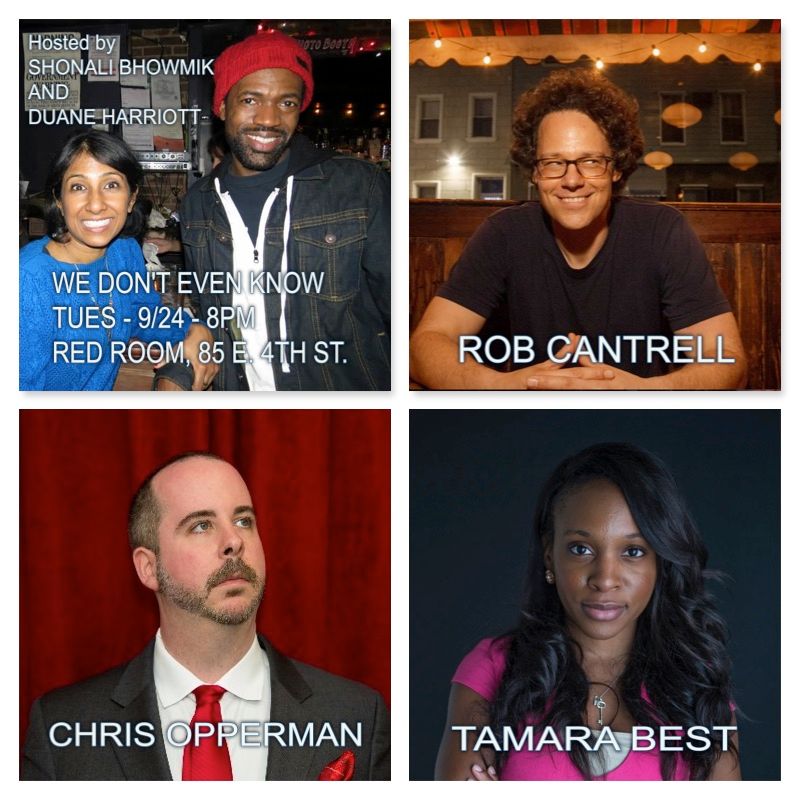